Update May 2021 – Donkey Lane Friends Group: Rosemary and her team do a wonderful job working on the lane but would really appreciate help with this. You could join Rosemary and the team on their workdays or you could adopt a section of the lane to look after at a time convenient to you. Why not get together with a few friends and create your own work party?

Rosemary would provide advice and guidance on the work required and planting scheme for the lane and also has access to tools.

Working outside is good for your health and being with others can also make this a social occasion.

Update April 2019 – Donkey Lane is looking really good in the sunshine this week. The trees are coming into leaf and the many plants are blossoming. Most of the trees have survived last year’s drought with very few casualties. Well done and thank you to Rosemary and her volunteers for looking after the Lane and making it an attractive addition to our neighbourhood. If EVRA hadn’t taken on this work the lane would be an untidy tangle of bramble and nettles. The City Council would only cut the grass areas and the edges but would not have maintained the rest because of  financial constraints.

Please contact Rosemary on Norwich 452185 or email: rosesunny@live.co.uk if you are interested in helping. The friendly team meet most Wednesday afternoons and it is a social occasion as well as an active session. Rosemary can provide tools and advice.

Here are some photos of the lane this week (17 April). 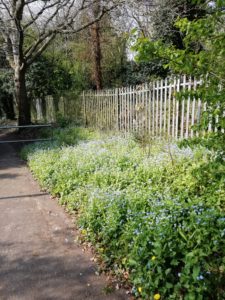 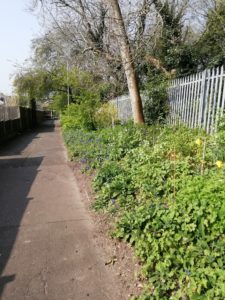 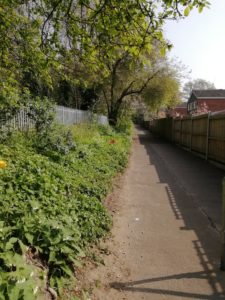 Update July 2016 – Virtually all of the trees planted in the spring are in leaf and looking to be in good condition. The team continue to weed and manage the area with further planting during June. Just a few nettles and determined brambles have survived from the clearance project last Autumn and will be dealt with! We have a number of helpers but anyone interested in joining us will be very welcome. Contact Rosemary on Norwich 452185 or email: rosesunny@live.co.uk.

There has been a great display of poppies along the lower section of the lane during early July as seen in these photos. 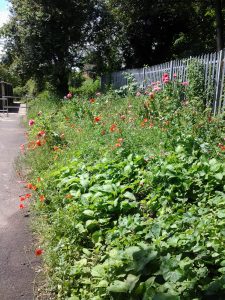 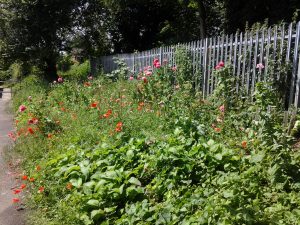 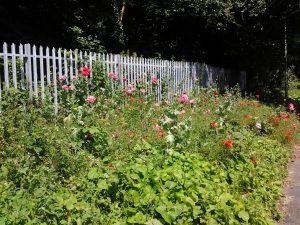 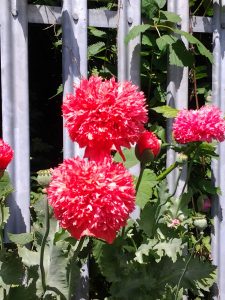 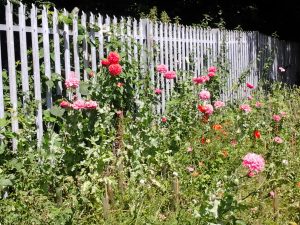 Update March 2016 – Rosemary and her team of volunteers have made great strides clearing the nettles and brambles along the fence. Around 800 saplings donated by the Woodland Trust have been planted and wild flower seeds sown. The team also planted about a 1000 crocus and narcissi bulbs last Autumn which have flowered this Spring. This will be an ongoing activity with care needed all year. Many thanks to all who have helped in any way. We have a number of helpers but anyone interested in joining us will be very welcome. Contact Rosemary on Norwich 452185 or email: rosesunny@live.co.uk.

In October EVRA signed an agreement with the City Council for the Association to take on some of the maintenance work on those sections of Donkey Lane under Council ownership. Under this agreement EVRA will largely look after the banks along the lane. The City Council will continue to cut the grass, manage the trees and be responsible for the path itself and lighting.

A Friends of Donkey Lane volunteer group has been formed and they have already started work clearing away the brambles and nettles and generally tidying up the area. The City Council have taken away all of the vegetation cut back by the team – this is part of the agreement.

Norwich in Bloom donated 100s of crocus and narcissus bulbs which have already been planted in the grassed areas.

The Woodland Trust donated 420 young trees ( including: hazel, holly, and hawthorn) together with canes and protective spirals which the team are planting along the banks. Once these have reached a suitable height the trees will be managed as a hedgerow and will help soften the effect of the metal fence along the lane.

The volunteers generally meet on Wednesday afternoons. If you are interested in helping out then please contact Rosemary Benton – Chairman (Email: evra.chair@yahoo.com) Tel: 01603 452185 who will pleased to give you further information.

Here are some photos of the work of the team:

The Chairman’s Report to the 2015 AGM including the following update on Donkey Lane:

In April we initiated a project to improve the look of Donkey Lane. The City Council will only undertake minimal cutting back of foliage and grass cutting and we asked if EVRA could take on some of this. We met with the City Council and local residents and found that there was sufficient support to make this viable. The Project has moved ahead slowly but EVRA now has permission from City Hall to manage areas of the lane. The Council will continue to cut the grass and manage the trees. We will now set up a group of volunteers to come and support our community work days there. Please contact me, Rosemary Benton, if you would like to be involved.

Update 2nd May 2015: The proposals to undertake maintenance only apply to those areas under Council control and within public ownership for which a licence can be granted by the City Council. Other areas of the lane are owned privately or held in a Trust and these would not be touched except with the agreement of the owner. We are aware of the areas that are not under public ownership and would need to confirm the boundary of these before any work started. Here is a map of the area with Donkey Lane highlighted: Donkey Lane Map May 2015

Donkey Lane is a well used footpath linking Greenways with Wentworth Green. During the construction of the fence along much of the length of Donkey Lane the banks were cleared but nettles, brambles and other plants have since become re-established. The area from Greenways up to the Brentwood footpath is becoming overgrown and is likely to become more so during the summer. The City Council will occasionally cut the grass between Wentworth Green and Brentwood and trim the edges of the other areas but it is unlikely that any other work will be done. We understand from the City Council that there is no funding available for any additional maintenance works.

The EVRA Committee has discussed what to do about the lane and recently contacted the City Council to explore whether the Residents’ Association might be able to help maintain this. The City Council has said that it would be possible for residents to undertake work and that the Council would be able to enter into an agreement with EVRA to enable this to happen. The City Council would continue to cut the grass verges and maintain the trees but EVRA could maintain the other areas. We are aware from recent contacts with some residents from Brentwood that they share our concerns and would also be interested in helping to maintain the verges.

The support of Residents would be required for EVRA to take on the maintenance of Donkey Lane – the Committee could not do this by itself. Our thoughts are that we form a “Friends of Donkey Lane” – a group of volunteers who periodically meet to perform maintenance tasks such as clearing and cutting back brambles and other vegetation to keep this under control. We could also plant trees and shrubs to enhance the area. We do not envisage turning the lane into a pristine garden but create a more attractive area through maintenance and planting. The lane can be divided into three distinct areas and each of these could be dealt with in a different way. We would seek advice from the City Council and the Norwich Fringe Project on what sort of planting would be appropriate for each area. The working sessions would also be a social occasion with Residents getting to know each other during breaks.

EVRA would only be able to take on the maintenance of the lane if we had the support of Residents and also willing volunteers to turn up and do some work. We could just leave Donkey Lane as it is and let nature take its course but it will become increasingly untidy as the nettles and brambles take hold more firmly. Several Residents already undertake voluntary conservation work on Marston Marsh under the leadership of the Norwich Fringe Project and are experienced in doing this type of work.

Let us know what you think. Also let us know if you would be prepared to become a “Friend of Donkey Lane” and help to maintain this. You can email your responses to EVRA Chairman Rosemary Benton at evra.chair@yahoo.com or to Chris Stebbing at evra.vc@live.co.uk. Alternatively you can post a response in the EVRA post box at Waitrose.