Skip to content
The City Council has painted double yellow lines on the corners of Purtingay and Duverlin Closes and Greenways and marked up the Car Club bay. The double lines are there to discourage drivers from parking on the corners and causing obstructions to other drivers.
Problems arising from traffic and parking around Eaton Primary School have been a long standing issue and EVRA has had many discussions with the school, City Council, Councillors and Police to seek solutions to this. The installation of yellow lines should help alleviate the issue but may move the problem elsewhere through a reduction in the available space for parking.
There have been several occasions recently when the bus has had greater difficulty than usual negotiating its route through to its turning point on Norton Drive at the start and end of the school day. The 5A bus provides an essential service to Eaton Village and we wish this to continue. There is a risk that bus services may be amended or withdrawn if access is regularly restricted through inconsiderate parking.
Any comments can be sent by email to: evra.vc@live.co.uk
Chris Stebbing – Chairman EVRA
Response from Eaton Primary School to EVRA Consultation

We have received from Allan Lowe, Headteacher at Eaton Primary School, an initial response to our consultation on traffic and parking issues around the school. We understand that this was presented to the school governing body before publishing wider.

The school say they are keen to be a helpful partner in the community and will keep engaged with EVRA and the residence, responding to issues to the best of their ability.  You can read the responses here:

The Car Club Bay for the top end of Greenways has been approved together with associated parking restrictions which should help to alleviate the traffic and parking issues around school times. You can read about it here: Update on Traffic and Parking around Eaton Primary School 050416

Update from Spring 2016 Newsletter – The issues and concerns arising from parking and traffic around Eaton primary School have been a long running topic for EVRA. A meeting at the school last Autumn led to EVRA delivering a letter to residents adjacent to the school seeking their views on the possible options for dealing with this. The letter with other supporting information was also posted on the EVRA website and Facebook page. Thank you for your responses which were largely not in favour of widespread yellow line parking restrictions in roads around the school but did highlight many of the inconveniences experienced by residents that could be addressed by the school. In particular the dangers posed by large delivery lorries having to reverse up Duverlin Close because they cannot access the school premises. All the comments have been posted on our website together with some answers to a number of the questions raised. We will pass these onto the school and the City Council.

Here are all the responses received via email and letter:

FAQs for Traffic and Parking Issues around Eaton Primary School 250316

Why are we raising this now?

In October 2015 EVRA were invited to meet with Eaton Primary School to discuss traffic and parking concerns raised by parents. The meeting was attended by School officials, a parent representative and the Transport Planner from Norwich City Council. The meeting was called at the request of parents who were concerned about road safety issues arising from inconsiderate parking and several near-misses between cars and pupils. There has been some follow-up activity since the meeting and we considered that EVRA was now in a position to formally approach Residents.

The School said that they had received a lot of complaints regarding the standard of driving and parking around Eaton Primary School, including one or two near misses reported by parents.

EVRA and Local Councillors regularly receive messages from residents near the school about inconsiderate parking where drives are blocked or access is restricted through badly parked vehicles. Residents also report vehicles parked on footpaths and corners which restrict the view of oncoming vehicles.

The School say they are keen to try and assist where they can, as the children’s safety is of paramount importance to them. However, as this matter is outside of school, there is really very little they can do other than to send a general letter to parents, which of course they have already done. It was noted that virtually every school in the City (and beyond) has the same issues with parking and traffic.

In addition to this website posting EVRA will deliver a letter to households in the affected roads summarising the issues and seeking their views on the way forward. (That is: top end of Greenways beyond Atmere Close, Ellcar Rise, Purtingay Close, Duverlin Close, Fulton Close, Bradenham Way and lower sections of Brentwood.)
If there is sufficient support from Residents for parking restrictions then these can be pursued further with the City Council. You can read the letter here: Letter to residents about school parking options 23 Jan 2016

What is the issue?

Parking and traffic around the school at the start and end of each school day has been a problem for many years and the EVRA Committee and our local Councillors are regularly contacted by Residents affected by this. There have been many meetings between EVRA and the School, Police and Councillors to find a resolution but with little success. EVRA attended the “new parents” meeting at the school in June last year and appealed to the attendees to be considerate about parking and driving around the Village and to try and walk or cycle if possible. The school has a travel plan in place and newsletters regularly remind parents about inconsiderate parking and to encourage other methods of travel to school. Almost every school in the area has a similar issue with parking and traffic during school runs. Here is a link to the School Travel Plan: http://www.norfolk.gov.uk/view/NCC073222

The roads mainly affected are the top end of Greenways beyond Atmere Close and all side roads leading off that section. There is also an increase in the number of cars parking in Wakehurst Close at the rear of the school. The peak times for this are 8:30 to 9:15 am and 3:00 to 3:45pm on school days.

Despite letters from the school the problem persists and the parents themselves have become increasingly concerned about the behaviour of other parents and the risk this poses for their children. In particular, the parents cited parking on corners and on footpaths as a key concern as this restricts vision for cars emerging from side-roads and prevents buggies from passing by. Parents also reported many instances of poor driving with several “near misses” when lots of children are leaving school.

The school regularly conducts travel surveys and has identified that around half of the 390 pupils travel by car and that this has been consistent for some years. The most recent surveys have shown that the closure of the gate between the Golf Club and CNS has not increased car usage.

What are the options?

• Encouraging parents to park further away from the school, such as at Waitrose, and walking the remaining distance, or
• Implementation of parking restrictions in affected roads.

In respect to the first point, the school had set up “walking buses” some years back but they gradually fell into disuse. These rely on parents to help and have to address safeguarding issues before being set up. The school regularly raises the issue of parking in newsletters and at meetings for new intake parents (EVRA attended one such meeting in June last year). Children have been involved in campaigns to encourage walking and reduce number of cars travelling to school but these have not solved the problem. The School travel Plan provides advice on the various alternatives for travelling to school.

On the second point the City Council said they could implement parking restrictions (subject to availability of funding) which only apply during the peak affected times so as not to inconvenience residents at other times. These could be single yellow line parking restrictions in the affected roads – top end of Greenways, Ellcar Rise, Purtingay Close, Duverlin Close, Fulton Close, Bradenham Way and lower sections of Brentwood. The restrictions could be limited to school drop off and pick up times and during term time only. However, there is a shortage of parking enforcement patrols to regularly check and enforce such restrictions. It is highly likely that parents would then park beyond the restricted areas causing parking issues in other parts of the Village.

EVRA believe that blanket restrictions would be unfair to residents but that there may be scope for targeted restrictions such as double yellow lines on the corners of the most affected roads. There are currently parking restrictions at the turning area on Ellcar Rise adjacent to the school but these are sometimes abused. The ideal solution would be for parents to change their behaviour and for fewer children to be driven to school. See map below for detail of the affected area.

PCSO numbers have been reduced and Eaton is now covered by an officer who works only two days a week and who also covers many other schools in the area.

In summary, there is no easy answer to the issue of parking close to the school. Many children travel from beyond Eaton Village and public transport is not convenient for them. We heard that the new Cringleford school is full and that further houses being built at Roundhouse Park could lead to more children travelling to Eaton Primary. Any parking restrictions implemented would inconvenience residents, are unlikely to be enforced, and would move the problem to other roads in the village.

Where do we go next?

So in essence this is not an issue caused by the residents of Eaton Village but by the inconsiderate behaviour of some of the school parents. But if we want to deal with the problem then residents may have to accept some parking restrictions in their area. The traffic and parking problems are only for a short duration, morning and afternoon, on weekdays during term time and may be bearable compared to the imposition of parking restrictions which will also affect residents!

Please let us know your views on this matter.

We could just leave things as they are but here are some questions for you:

What is your view on the use of parking restrictions to deal with the traffic and parking issues during school hours?

Would you like to see restrictions in place and if so where and during what times?

What other solutions do you think could be considered?

Let us know through the Contact Us section of the EVRA website: www.eatonvillage.co.uk,
or via email to: evra.vc@live.co.uk
or drop a note into the EVRA postbox next to the cashpoint in Waitrose.

Here is a map of affected area with current parking restrictions on Ellcar Rise highlighted. 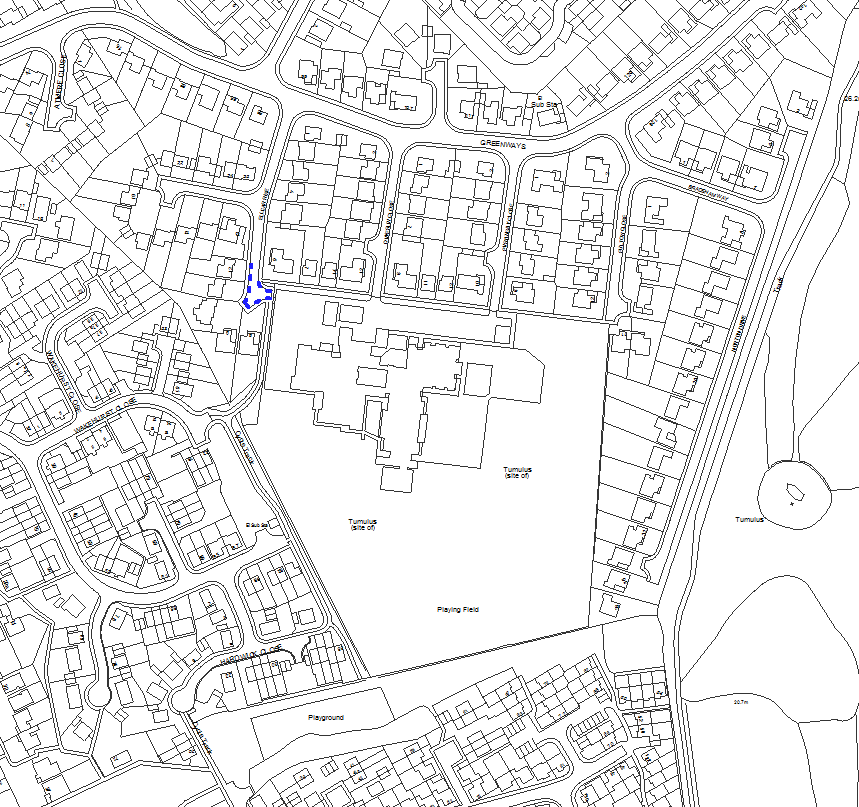